A costume contest for pets in 2006 got me thinking about what costumes I could make for my dogs. Yes, it had to be for more than one. I had three dogs that were my constant companions – Chip, Tory and Arwen.

So, one for all and all for one! They became the Three Musketeers.

Designing the costumes was interesting because they had to be instantly recognizable, but my dogs also had to walk in costume. After a quick Google image search, I decided on hats with feather plumes and the signature musketeer tunic. I also bought plastic swords for all of them, but could only convince one dog that they weren’t chew toys.

Off to the store for blue felt fabric, gold braid trim and fabric paint, black cowboy hats, fluffy white feathers and three plastic swords. The tunic/cape was cut and stitched at the top corners of the tunics then decorated with the gold braid and painted crosses. Next were the hats that had to be reshaped and adorned with the white feathers. They also needed some thin elastic as chin straps to keep the hats on their heads.

Luckily Labs are usually willing to play silly games like dress up! They did spectacular and even won the costume contest at the local Labrador club. I was hooked! 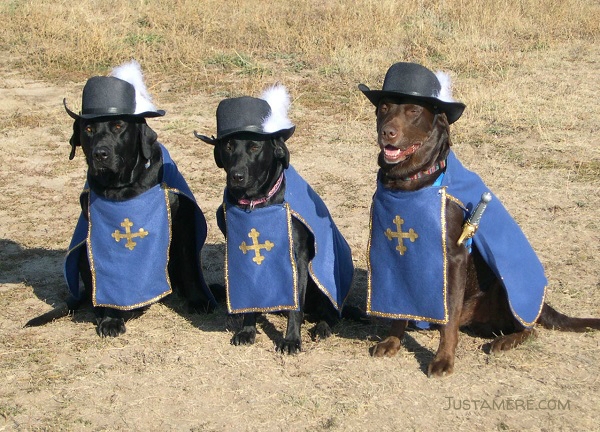 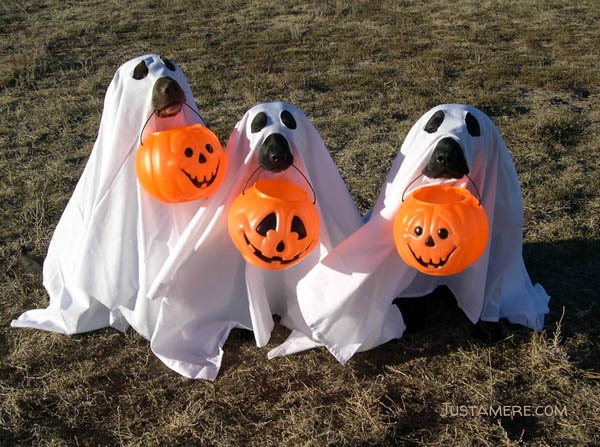 The next year was a test of their obedience skills because I decided to dress them up as ghosts and have them carry plastic jack-o-lantern buckets.

Off to the store for three flat sheets and three jack-o-lanterns! That was the easy part. Next came draping a sheet over each dog and trying to determine the best place to cut holes in brand new sheets. It took some trial and error – with each dog – to find the perfect place and sizes for the holes.

Because they were hunting dogs they were all taught to fetch on command, but it took a bit to convince them that fetch also applied to the thin bucket handles that are nothing like a bird or a bumper. Then they had to learn that I wanted them to sit, with a sheet draped over them AND hold the bucket. And they had to do it at the same time and for long enough to get pictures.

They did it and got plenty of treats!

The next year had to be something simple because I didn’t have time to make elaborate costumes for Halloween. So I dug out some hunting clothes – ball caps, camo shirts, duck calls, whistles, etc. But something just didn’t look right. Off I went to the nearest thrift store where I found three pairs of kid’s pants in tan and green.

Getting all three dogs to wear the hats, shirts, whistles and duck calls was easy. Putting pants on them took a bit more work.

When they were (somewhat) dressed and sitting with the bird vest containing their two ducks hanging on the fence post, I took the picture. Just as the shotgun fell over. No, it wasn’t loaded, but it got their attention and as they moved hats fell off, pant cuffs were stepped on and general mayhem ensued. Good thing that one photo turn out so well! 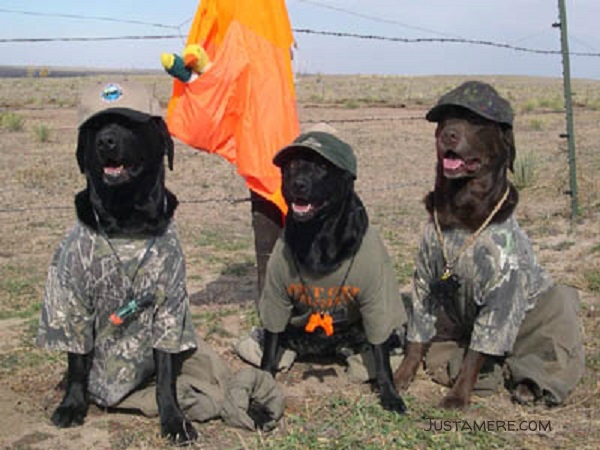 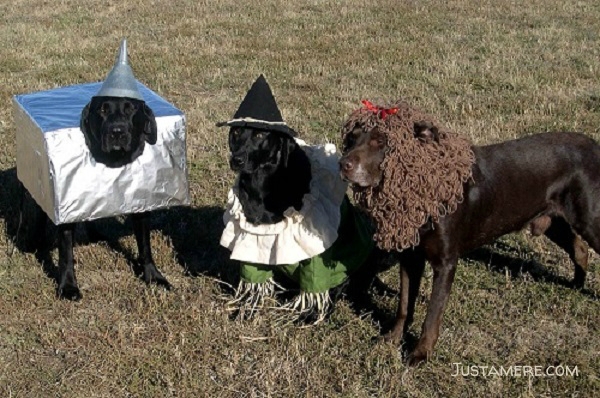 As Halloween 2009 drew nearer, I was trying to come up with a theme so each dog would have a unique costume but be recognizable as a trio. Pairs are easy, threesomes take more work!

Meet the Tin Man, the Scarecrow and the Cowardly Lion.

Good thing Tory the Tin Man had learned the Stand for Exam obedience exercise because otherwise that aluminum foil covered box would fall off. The metal funnel stayed put with a thin piece of elastic under his chin.

Arwen’s scarecrow costume took some sewing and several fittings to come close to fitting her. And by now she was used to having to wear a hat of some sort.

What took the longest to make was Chip’s lion mane. It took a whole skein of tan yarn sewn piece by piece to a stretchy piece of fabric.

I’m not sure if they were starting to enjoy Halloween dress up or if they were just resigned to my shenanigans. After all, I was the one who fed them!

In early October 2010 I found myself wandering the Halloween aisle in the local store, trying to come up with another trio of costumes. Checking a bit of this and a bit of that and I came upon a red bustier (corset) that was sized for a child. There were also cowboy hats and six guns nearby. Hmmm.

In addition to the bustier, I wound up buying a black wig, two cowboy hats, two sets of six-guns with belts and holsters, a sheriff’s badge, a red bandana and some fabric pieces in black and tan.

Tory and Chip were perfect in their roles – the black-wearing outlaw and the sleepy sheriff. Arwen was not pleased though. I don’t think she liked having to wear a girly outfit with a wig AND sit up. She would have made a good outlaw, but for this year she was the dance hall gal.

The things my dogs have to do! 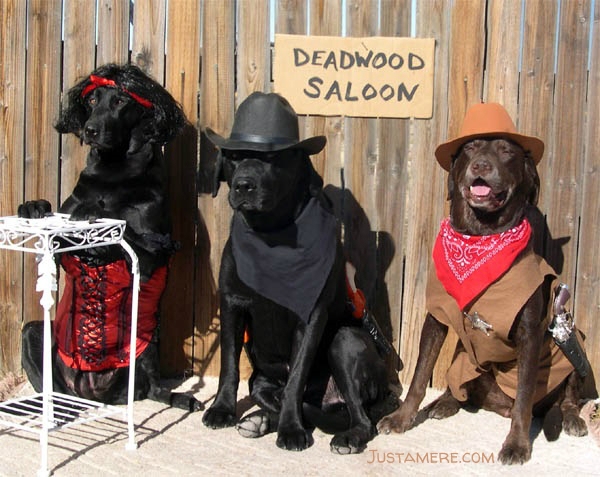 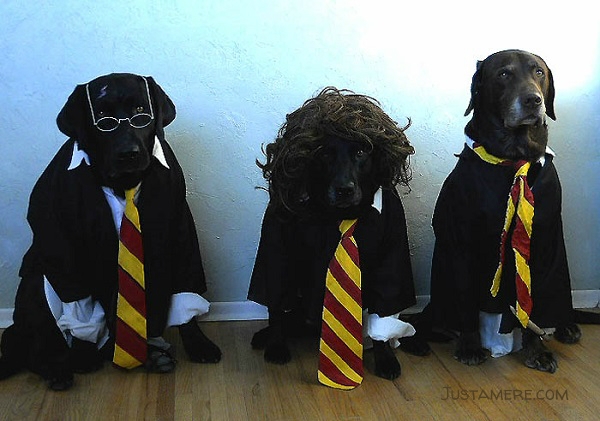 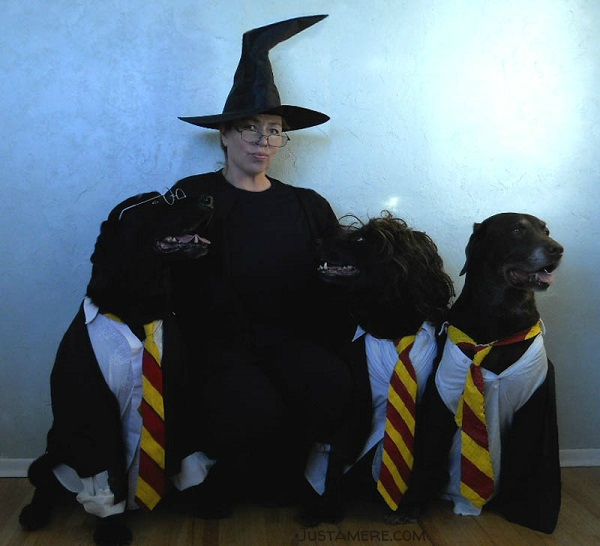 For Halloween 2011, I decided to show them that dressing up isn’t all that bad. So I joined them.

Another trio – Harry, Hermione and Ron – plus one – Professor McGonagall. And yet another trip to the store where I found three white shirts, three men’s ties, red and yellow fabric paint, a black witch’s hat, two pairs of reading glasses, white chalk and black fabric. Whew!

Starting with the ties, I turned them into Gryffindor ties with several coats of the red and yellow paint. Notice how one turned out a bit wrinkly? That was Ron’s tie. His shirt didn’t tuck in well either.

Next was sweet talking Tory into wearing glasses and Arwen into wearing the wig again. It didn’t look quite right though, so I took the lenses out of one pair of glasses and painted them white to show up better on a black dog.

I also sewed the black fabric into robes (kinda) for all four of us. Got us all dressed, added a lightning bolt on Tory’s forehead and told them to say ‘cheese’! And, yes, they smiled! They also got to go to the Halloween party and schmooze everyone for tasty treats.

Since we were overdue for another Star Wars movie, Halloween 2012 became an homage to the series, but which three characters should it be? Darth Vader, of course. And when you have bad, you need good. Luke, Leia or Yoda? Costume-wise, Luke was boring and I didn’t want to try hanging cinnamon rolls on my dog’s head, so Yoda was it. And, of course, you need the iconic R2D2.

Next was figuring out which parts of the characters were needed for people to recognize the costumes: Yoda’s ears and light saber, Darth’s light saber, cape, chest plate and helmet (well, most of it because the mask wouldn’t fit) and R2D2’s shape and coloring.

Back again to the store to get a round, plastic bowl, white fabric, blue, white, green, red, silver and black paint, black, green and light tan fabric pieces plus some fusible interfacing. I also had to dig around in the Christmas wrapping paper to find two cardboard cores.

Do you have any idea how long it takes to paint a bowl and fabric to look like R2D2? And that was just the start. Darth’s helmet and Yoda’s ears both took several fittings, plenty of sewing and LOTS of interfacing to make them stiff enough to look right. Then more sewing to make Yoda’s robe plus painting two light sabres. Luckily last year’s Gryffindor robe worked great for Darth too.

It was worth it though because I think this was one of the most popular sets of costumes. They were dubbed R2-Dog2, Dog Vader and Yo Dawg. 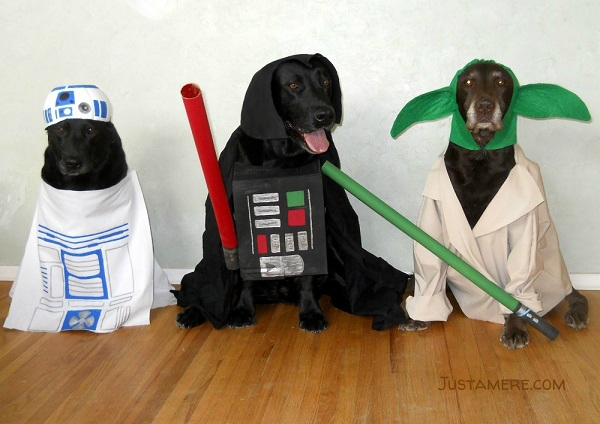 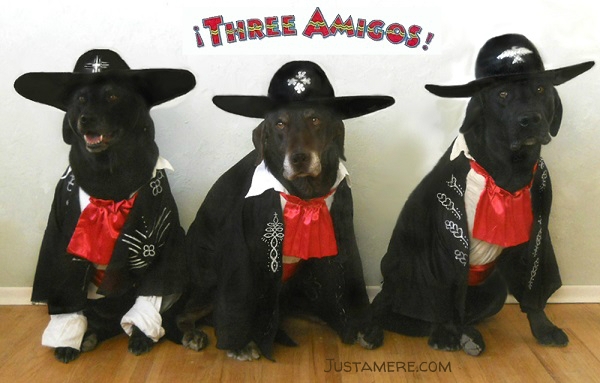 If you can’t tell, I choose characters that are usually a bit over the top to make interesting costumes. So it should be no surprise that Chevy Chase, Martin Short and Steve Martin made an appearance for Halloween 2013 as the Three Amigos!

With a bit of silver paint, the Gryffindor robes became sparkly jackets. The white shirts were reused too. So I only needed to buy three more hats and some red fabric for the ties and cumberbunds.

And then paint. And paint some more. I think Arwen finally liked her costume though.

Liking her costume was short-lived. For Halloween 2014 I put Arwen in a pink Cheshire cat costume and had her lay down on a bench. If looks could kill…

This was a tough set to get right, especially a black Labrador as the white rabbit! Ears, tie, jacket and a clock kinda worked. The Mad Hatter was a little easier with the tall green hat even though you can’t really see the playing card stuck in the brim.

There was a fourth player too, but it wasn’t me this year. In the story, there is a Dormouse who pops out of a teapot. I tried James the rat as a stand-in, but he never got his cue right… 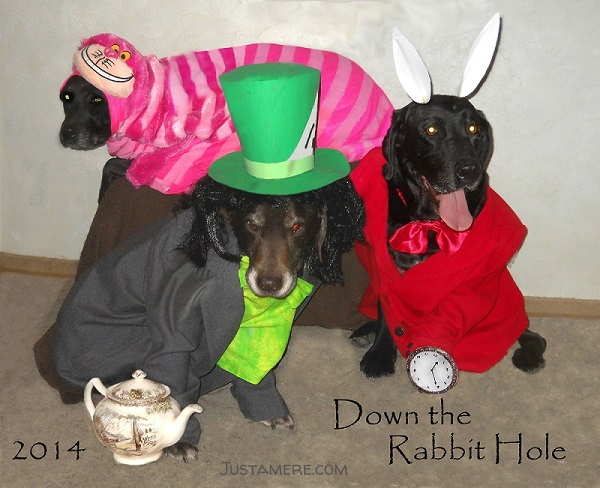 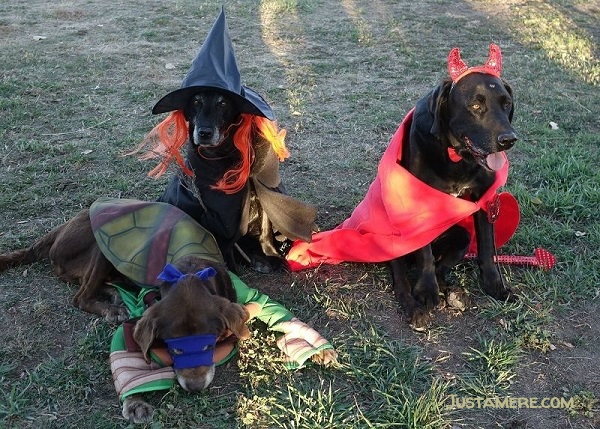 By Halloween 2015 we were winding down. Chip was nearly 17 and slept a lot. Tory had been diagnosed with cancer. And I was heart sick. I felt I needed to do one more Halloween photo, but it would have to be simple.

Off to the store again where I found some ready-made costumes – a devil, a witch and a ninja turtle.

I lost Tory just a few days later and Chip that December.

In 2016 Arwen was still willing, so back to the store I went. This time I needed some felt in brown and tan, a girls plastic headband and some wire.

I cut a big piece of cardboard into a shield shape and added some ‘wood grain’ with a Sharpie. Next I cut the felt into some oval shapes and rolled and glued them to make ears. Then I attached the ears and a couple bits from a tree to the headband.

With a little persuasion, Arwen sat with this contraption on her head. Isn’t she cute? 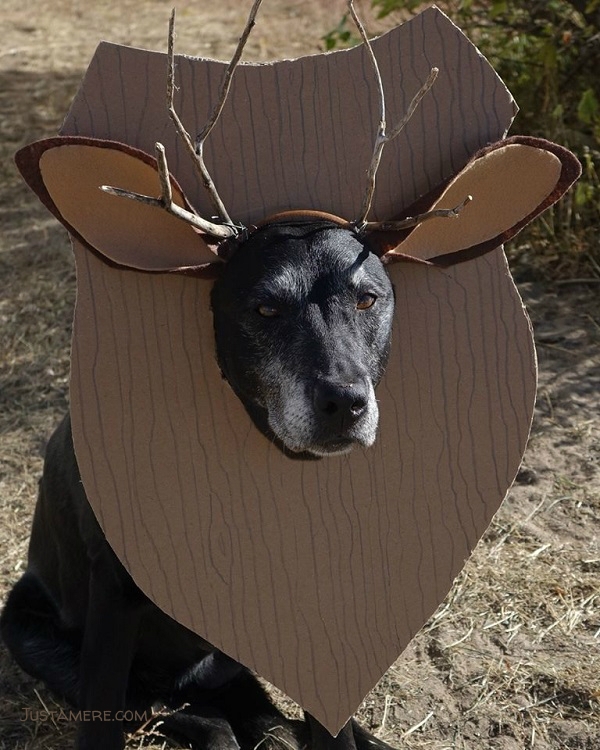 I hope you found some inspiration to make costumes for your dogs.