Luckily Gregor Mendel tested his theories on the garden pea that has a relatively simple genetic structure. He crossed yellow peas with green peas and tall plants with short plants to discover the fundamental laws of inheritance.

Mendel theorized that each parent contributed the “elementen” (one gene) for any given trait so the offspring had a pairing of those two genes and that you could not “draw from the external resemblances conclusions as to internal nature.”

What you see on the outside doesn’t always tell you the genetic makeup.

Before breeding, the DNA strands carrying  “… chromosome pairs are split apart and distributed into cells called gametes. Each gamete contains a single copy of every chromosome, and each chromosome contains one allele for every gene.”

Genetic testing is helping to make breeding decisions a bit easier. Most of the genetic tests we have available for our dogs are for a simple recessive gene, like yellow or green in the garden pea.

– heterozygous – having two different alleles of a particular gene or genes

– homozygous – having two identical alleles of a particular gene or genes

If your puppy’s parents have been tested or if your puppy shows a genetic trait, such as yellow or chocolate color, you can make an educated guess about his genetic make up.

If he is yellow, then his parents are either yellow or carry yellow as a hidden gene. Both must carry at least one copy of the yellow gene.

If he is black, but has a yellow parent, then he carries one copy of the gene for yellow. And it works the same for chocolate.

Because yellow and chocolate are controlled by different genes you can’t know whether he carries the gene for the other color based on his color. With one exception. Yellow Labradors usually have black noses and eye rims. When a yellow Lab has a chocolate nose and eye rims, he is homozygous for both chocolate and for yellow. Although it is a natural color in the breed, it is a disqualification in the show ring.

In a graph, the dominant trait (such as black in Labradors) is capitalized and the recessive trait (chocolate) is lower-case, thus:

Therefore the yellow puppy with chocolate points, would be shown as bbee with “e” signifying yellow. The dominant allele – “E” – means “not yellow.”

Early in the Labrador’s history, yellow and chocolate puppies would appear occasionally. But because those colors were not popular, they were rarely bred (and sometimes not even allowed to live). With no genetic testing available and limited knowledge of inheritance, breeders didn’t know that those recessive colors lurked in their dogs’ genetics and would appear when the dog was bred to another dog who carried the same recessive color.

It is possible for a recessive gene to remain hidden for many generations. For example, Sandylands Mark, born in 1965, was black carrying chocolate despite 19 generations of blacks and yellows in his pedigree.

As a side note, because chocolate is a recessive gene, ads proclaiming “dominant chocolate” stud dogs are incorrect. Chocolate is not only recessive to black, but is a separate gene from yellow. The ads probably mean “pure for chocolate” instead.

For traits you can’t see, you should test unless both parents are clear for the trait.

EIC, CNM and PRA are examples of simple recessives. Here are some charts showing potential outcomes for a hypothetical trait “X” where “X” is the dominant allele and “x” is the recessive allele. 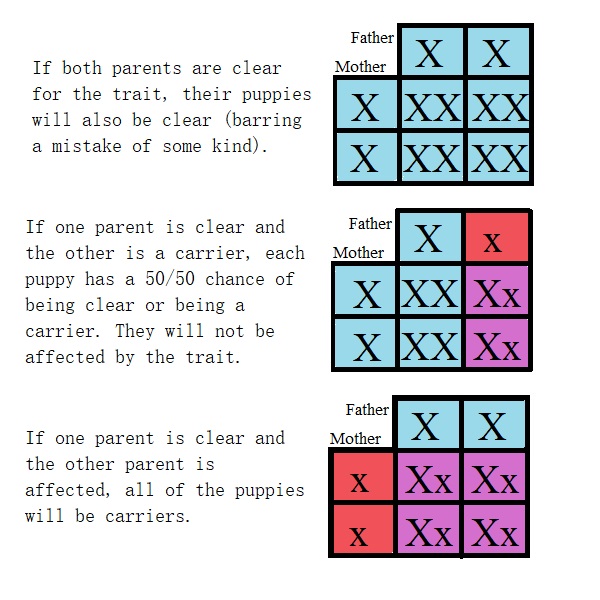 These examples hold true for any trait that is a simple recessive.

Note: statistics only hold true with very large samples, except for breeding clear to clear or affected to affected where all puppies will be like their parents. However a carrier to carrier breeding could have all clear puppies or could have all affected puppies.

The CNM Project in France recently released an update on their research into Centronuclear myopathy (CNM) in Labrador Retrievers. You can read the very scientific update at http://www.plosone.org/article/info:doi/10.1371/journal.pone.0046408

In a nutshell, CNM is a collapsing disorder. Symptoms generally develop between two to five months of age and include gait abnormalities, generalized weakness and tiring easily, a lack of “knee cap” reflexes and muscle wasting. CNM can affect both sexes and all three recognized colors.

It’s a genetic disorder and requires two copies of the CNM gene – one from each parent.

Puppies with only one copy of the gene are carriers and don’t develop symptoms, but if they are later bred they can pass the CNM gene on to their puppies. The researchers estimate one dog in seven is a carrier so all breeding animals should be tested (unless both parents are tested clear).

Dogs that are affected or carriers can be bred, but must be bred to a dog clear of the CNM gene to prevent producing more affected dogs. And that’s in addition to testing for dysplasia and eye problems, at the very least!

In the past seven years the researchers tested samples from over 7,400 Labs and found 80 affected dogs. They believe it started with a single mutation about 50 years ago and has rapidly spread to at least 18 countries through the use of popular sires.

Although it is not fatal, it is a debilitating disorder and an affected dog will require a supportive caretaker.

Here is a video of a 5 month old affected puppy. Note the general weakness and body position, particularly the head and neck.

Here is a video of another Lab having a particularly tough day although she’s determined to get her bumper.

Here is a video of an adult Lab who has been able to overcome many of the symptoms of CNM with the help of his caregivers. According to his owners, “As a puppy, he couldn’t hold his head up, control his tongue, hold a tug toy, walk for more than a few feet without having to crawl, or climb stairs.”

And, no, CNM is not the same as Exercise Induced Collapse (EIC), although both disorders are genetic. CNM is a muscle weakness whereas EIC is a neurologic dysfunction.

Here is a video from the University of Minnesota where they are doing research on EIC.

If you want to learn more about CNM, go to the official CNM website at http://www.labradorcnm.com/pages/site/0-frame_site.html

I read an interesting article this morning. Are breeders blind? Or are we operating under a misconception? The article concludes that the majority of dogs are not normal.

“According to Padgett (1991), most breeders continue to believe that the dogs they own are genetically normal.”

Well, gee, I thought they were.

Padgett also reported that “the average number of defects in most breeds may be fourteen.” Some breeds could have as many as 58 defects.

Well, not MY breed.

When the Exercise Induced Collapse (EIC) test came out, I tested my Labs and was blindsided to learn that one was a carrier.

OMG! My dog is defective! I had no idea that one of my dogs harbored that dreaded disease.

My reaction seems to be typical of many breeders. Not only do we believe most dogs are genetically normal, but that having a dog with a defective gene was so out of the ordinary that it should be kept a secret. If we talk about having a defective gene some people might feel our dogs are “less than average or perhaps abnormal.” So we bury our heads in the sand and hope that it will go away.

If we can change our way of thinking – that most dogs are not genetically normal – then it won’t come as such a surprise to get results showing defective genes. If it’s not such a surprise, then maybe we’ll be more willing to share the results thus making it easier to eradicate that gene.

My dog carries one copy of the EIC gene. Dogs with two copies of the gene may collapse under some circumstances. She was fine, but I had to be careful to only breed her to a male who was clear of the gene.

Whew! That doesn’t sound so bad.

So we test before deciding to breed and choose mates wisely.