“Dynamite uses only natural ingredients, made in the United States for better quality control. Throughout its history of making natural dog food, it has always looked at alternatives to animal by-products, antibiotics, chemical preservatives, fumigants, artificial coloring and other additives that have later caused dog allergies and other health problems.

“Its manufacturing processes are so stringently controlled that Dynamite has a separate mill to produce feed for herbivores, such as horses and poultry that are especially sensitive to contamination from meat needed by other species such as dogs and cats.”

I’m proud to be a Dynamite distributor for over 20 years!

I’ve had great results for both my animals and me. But because governmental regulations won’t allow us to make therapeutic claims, we can only tell you how we’ve used the products and share some stories from other people.

Here are some of the products I use and swear by:

Solace
If I could only have one Dynamite product it would be a toss up between Solace and DynaPro. We’ve used Solace (200 ppm colloidal silver) topically and internally, usually diluted with distilled water, but occasionally full strength. As an example, we used it combined with a homeopathic for cough when our dogs came in contact with kennel cough. They finished coughing within 24 hours, but a neighbor’s dogs continued coughing for two weeks.

DynaPro
I wouldn’t be without it! Anytime the dogs get stressed they get a couple of drops in their mouths or on their food. Weather changes, competition, breeding can all cause stress. By the way, we get the DynaPro for horses – same formula, bigger bottle, better price.

Miracle Clay
We’ve used Miracle Clay on all sorts of minor problems from bee stings, to bug bites, to other swellings. We have wasps who give a nasty sting, but using a dab of activated Miracle Clay has stopped the stinging within seconds.

Release
We’ve used it on sore muscles, blisters, and wounds. I even spray some on my face when I’ve been staring at the computer screen for too long.

Relax
We don’t use this product too often anymore, but it’s been helpful for stressful situations such as the first trailer ride or a farrier visit.

Tea Tree Oil
Cuts, scrapes and other booboos get topped with TTO. We’ve used it on us and the horses, but only when VERY diluted on the dogs.

Wound Salve
We use Wound Salve on open wounds, usually with Solace and/or Tea Tree Oil.

Balm
We’ve had great results using Balm on bruises, old scar tissue and even dry heels (to get ready for sandal season). By the way, Balm is used on closed wounds, while Wound Salve can be used on open wounds.

Showdown for Dogs / Showdown Pro
We started our Dynamite journey using Showdown and noticed quite an improvement in our dogs’ health. Coats became thicker and, in the case of chocolate Labs, a darker color. We supplement breeding females with Showdown Pro, starting before breeding and continuing through weaning the puppies. The girls maintain better condition and puppies get off to a great start.

Free & Easy for Dogs
Our older dogs get Free & Easy six days a week. One of our dogs was diagnosed with a partially torn ACL and the vet recommended immediate surgery. We chose instead to try conservative management (straight to rehab, skipping the surgery). It took awhile, but he went back to competing in hunt tests, obedience and rally trials thanks in part to Free & Easy and Izmine.

Herbal Tonic
Twice a year we give our dogs Herbal Tonic to avoid having to use harsh chemical wormers. To be safe, we also test for heartworm.

Hiscorbadyne
We keep Hiscorbadyne on hand for times when the dogs get stressed or need an extra boost to their immune systems such as during a recent outbreak of kennel cough.

DynaCoat
For show dogs, we’ve found DynaCoat has helped put on that extra bit of coat. We also gave it to a dog that generally had a rather sparse coat and within a few weeks she developed a nice plush coat and even grew hair along her belly and inner thighs where she never had hair before.

Super Premium Dog Food
I’ve tried several premium brands of dog food and this one has given us great results. It’s made with fresh, hand-trimmed USDA chicken, plus prebiotics and probiotics to aid digestion and only minimal processing to help preserve the natural goodness of the ingredients. NO corn or wheat. 24% protein, 16% fat. It comes in 8-pound and 40-pound bags. 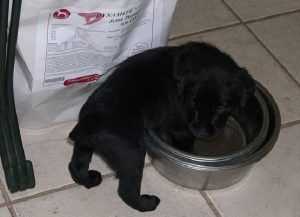 DM Plus
Yep, I take my vitamins too! Why take chances? I certainly don’t have the time to eat as well as I should, and I know with Dynamite I’m doing something good for the only body I will ever have.

Tri-Mins
As part of the Dynamite basic program, we take Tri-Mins for the additional minerals. Some people have asked why Tri-Mins is separate from DM Plus. It’s because we each have different needs for the minerals in Tri-Mins (calcium, potassium, magnesium) and this allows you to adjust the amounts as needed.

Elixir
I started the Dynamite program by taking Elixir mixed with water every day for 60 days. Now I take it whenever I feel a bout of heartburn coming on which, thankfully, isn’t very often.

Free & Easy for Humans
I recently had to start taking Free & Easy for my joints. A hand injury left one finger rather stiff, particularly in the mornings. Now I’m much more limber.

Izmine
My mom and some of my dogs have taken Izmine for joint health. My mom had bad arthritis in her hands and back and Izimine combined with Free & Easy helped make her more comfortable.

PMS (Premium Magnesium Supplement)
I’ve been told emergency room doctors often give magnesium to heart attack victims. Another source told me that most women are deficient in magnesium and it’s involved in enzyme and hormonal actions to help lower blood pressure. With all that in mind, I take a couple PMS every day.

180
Worried about packing on the pounds during the holidays?

I lost 30 pounds in two months on this protocol and overall found it to be pretty easy.

Horse products
Although my horses are leased out to a family with several children, they also get Dynamite products. I like the Dynamite Plus for the additional coenzymes and herbs to help calm and balance the gut pH. (Regular Dynamite would be a good choice for a horse in competition.) We also offer the Free Choice Minerals so each horse can eat as much or as little as they need. When we were breeding horses we also used Breeder Pac. And, of course, they also get DynaPro and occasionally Herbal Tonic.

Here are some results and stories from other people:

DM Plus, TriMins, Free & Easy and PMS
For years my mother would tell me every day that she needed to lay down because her back hurt. Her doctors had her taking calcium pills for osteoporosis plus 800 mg Tylenol whenever she had pain. But it wasn’t until she came to live with me that I found out about the variety of medications she was taking. The years of taking inorganic calcium had given her bone spurs and the daily Tylenol was causing other problems. So we weaned her off the medications that were contraindicated, provided her with better food choices and started DM Plus, TriMins, Free & Easy and PMS and the difference was almost immediate. In the almost 4 years she lived with me, I can only remember one time she had to lay down because her back hurt. 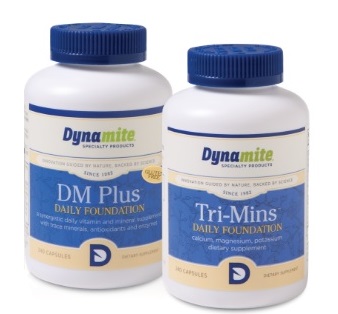 Free & Easy for People
As an aircraft mechanic, my husband misused his hands every day. That’s on top of a bad habit of popping his knuckles. He tried soaking his hands in warm water every morning to make it easier to open and close his hands. I gave him a bottle of Free & Easy, but didn’t think he’d take them. When he did, I realized just how much he hurt. He never said anything though. That is, until a few days after he ran out and had to resort to bathing his hands in warm water again. He actually asked for more F&E!

Free & Easy for Dogs
Story in a nutshell: Have an Australian Cattle Dog who will be 11 years old this August. He injured himself, caught his rear paw when running onto the deck early on. He favored it on and off for quite some time. Got tired of meds from vet when he seemed to be favoring it from time to time. He actually got to a point, at one time, that he couldn’t go up the stairs. So, looked for a more holistic approach. Researched the internet and found a site with testimonials on Free and Easy. Then researched the best price to buy which was from you. At the time I began using Free and Easy also switched him to an organic, high quality dog food to which I add a spoon of pureed celery to each meal, as celery contains alot of water content which aids the joints in arthritic situations. The vet not convinced about this, but I find the results to be good. And the rest is history. Don’t know if it is one item or combination of all, but he has not been on meds for this condition for years now.
R Witalec

DynaCoat
Well it worked, back to back Winners Bitch (have not earned any points for the last two years).
Sandy Nixon

Showdown
The dog’s coats are what people comment on the most. They look like they have just been bathed they are so shiny. Their gums have a nice color as well.
Captain Tim Bradbeer
Beach and Bay Charters

Showdown
Bow is doing great. Still a ball of energy at 8 years and no signs of slowing down.
Robin Thorne 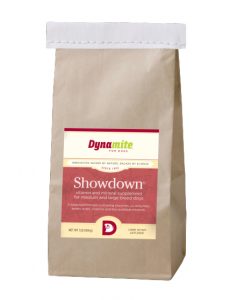 These statements have not been evaluated by the FDA and are not intended to diagnose, treat, cure, prevent or mitigate any disease. But you can always contact us if you have any questions. You can also get more information by clicking the button below.

You think your dog works hard? Check out these dogs who rack up over 3,000 miles conditioning in just 6 months and then run 150 miles a day for over a week in competition.

They’ve also smashed the winning time record over and over. Mitch currently holds the record at 8 days 3 hours 40 minutes 13 seconds. They are the first father and son duo in Iditarod history to claim the top two finishing positions of the race. Between them they’ve won the last 6 Iditarod races.

So why would I – a Lab person – tell you about sled dogs? Well, if a top musher chooses Dynamite products for his dogs it might be something for you to consider.

“We use Dynamite products year round in the kennel to maintain healthy, thriving dogs. The nutritional vitamin and mineral supplements are a key element in our their successful performance and great overall health,” says Dallas Seavey.

What other products does he use?

He says he’s had great success treating viral and bacterial infections “with activated Miracle Clay, Solace, Dyna Pro, and Trace Minerals Concentrate every 3 hours around the clock until well.”

Let me know if you have any questions about any of these Dynamite products!