The last local AKC retriever hunt test of the season is in the books. Beautiful property with fabulous water, good weather (yes, a bit hot) and lots of great dogs and their handlers. There was even a chocolate boy I’ve got my eye on!

My co-judge, Jeff Baldwin, drove all the way from Utah to bake in the high plains sun while Wyoming lent us some of their wind every afternoon. After we designed the Senior test on Friday, he also judged Junior on Saturday while I worked at Master and then we judged Senior together on Sunday. It was a long weekend.

So what did Jeff and I set up and why?

The requirements for an AKC Senior test are a double retrieve on land and a double retrieve on water plus a land blind and a water blind. Then we have to throw in a live flyer, an honor, a walk-up, a diversion shot and multiple decoys and other trappings to simulate a real bird hunt.

Here are some definitions by Rich Carpenter of PVHRC:

You can see the entire glossary at http://pvhrc.com/hunt-tests/glossary/

We chose to start off with the land series in the morning and the water series afterward to give the dogs a chance to cool off in the afternoon heat.

The first two photos were taken from the “line” – the spot where handlers bring their dogs to start the test.

To begin, we ran a “test dog” (a dog who was not in contention) to make sure everything worked as we planned and to show all the handlers the test set up. Of course, the dogs in contention didn’t get to watch! 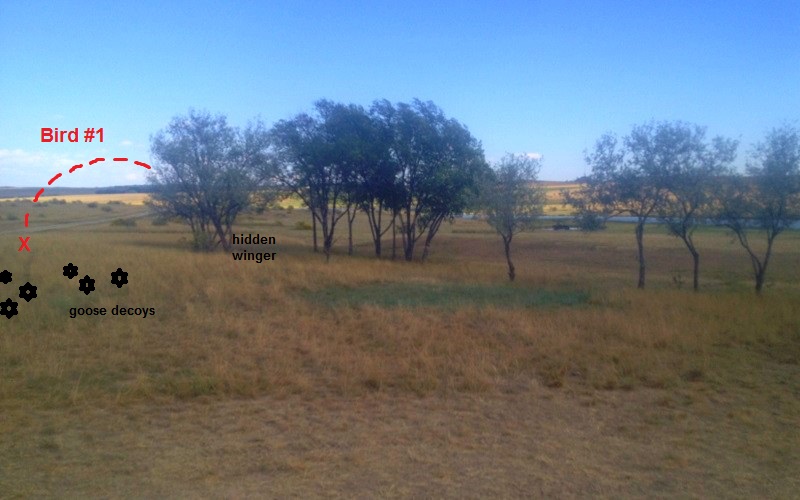 After completing those two marks successfully, the test dog (and handler) moved to the “honor box” which is a spot nearby where the dog can watch the next dog work. Having just completed two retrieves the honor dog is often still excited, but must be “steady” (remain quietly in place, off leash) and watch the next dog retrieve the same marks. This is often a challenge for dogs at this level.

Next the handlers brought their dogs one-by-one to the line. When they signaled they were ready, we had bird tech #1 throw a duck from a winger hidden behind a clump of trees near the left side of the field. The bird went from right to left and landed in some rather sparse cover, about 70 yards away. There were multiple goose decoys the dogs had to run through to get to the bird. Just before throwing the bird, the bird tech blew a duck call and shot a blank to get the dog’s attention.

As the birds are thrown, handlers must bring the shotgun to their shoulder like they were actually shooting. For safety reasons, the guns are disabled.

Many dogs wanted to retrieve right away, but they had to be steady and wait for the second bird to be thrown – a “double retrieve.” This bird was a “flyer” (a live bird that was thrown and then shot in the air) which is very exciting for the dogs. All the other birds were already dead before being thrown.

This bird #2 came out from a winger that was hidden behind the berm that ran parallel to and behind the line of trees. Flyers rarely land in exactly the same place for each dog so the distance to the bird varied, but averaged about 60 yards.

Because of the excitment caused by a live flyer, several dogs “broke” (ran to retrieve it before the handler’s command). Dogs that retrieved the bird without being released were disqualified. However if the handler was able to stop the dog quickly (within about 15 feet) and get it back to heel, they were allowed to continue but were penalized for a “controlled break.”

Some dogs didn’t break, but couldn’t contain themselves completely and moved a little bit towards the birds. This is called a “creep” and is penalized, but less than a controlled break. Any dogs that moved beyond the length of the gun barrel had to return to heel before they could be sent to retrieve. 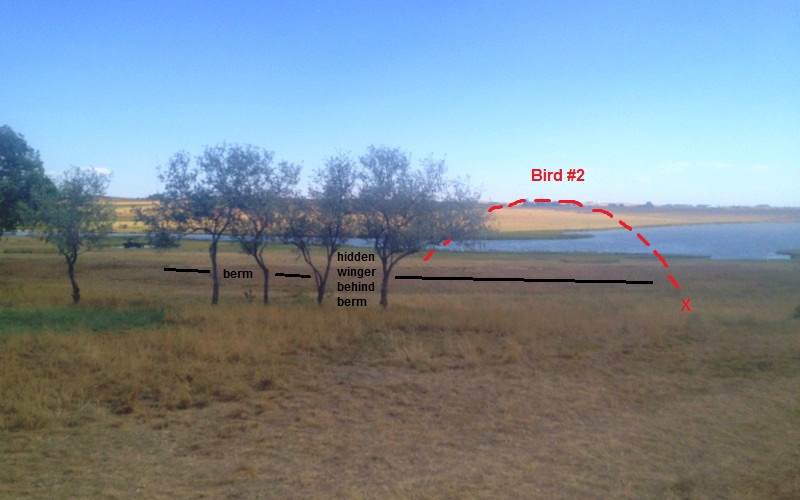 After both birds were down, we gave the handler permission to send his dog. They could pick up the birds in any order, but usually chose to get the last bird down first. This is especially so when that bird is a flyer! After delivering one of the birds “to hand” they were sent to retrieve the other bird. After the working dog was sent on the first retrieve, we dismissed the honor dog.

Sometimes dogs forgot where the other bird landed and had a big hunt or started back towards where they already found a bird. Returning to an old fall and switching are both disqualifications. They are similar faults, but “returning to an old fall” is going back to where they already retrieved a bird while “switching” is abandoning a hunt for one bird to go to a different bird.

When a dog started hunting too far away from the bird or they started toward the other bird, handlers would blow their whistle and handle the dog to the bird using the same technique as a “blind retrieve.”

If the working dog did a passable job on the double retrieve, they next had a “blind retrieve.” This is picking up a bird the dog didn’t see fall and so had to be directed to it.

We “planted the blind” (placed a bird in a specific location when the dog wasn’t watching) near a small bush about 50 yards from the line. To get to the blind, the dog had to pass some larger bushes and diagonally cross a dirt track. The location was to the left of bird #1 and slightly out of the left side of the first photo.

To get a passing score, the handlers had to “challenge the blind” by keeping their dogs close to a direct line to the blind and not let the dog run all around in hopes that he would eventually find it on his own. Dogs were penalized each time they didn’t stop on the whistle or take the correct cast or maintain the new direction for at least a few yards. Because Senior dogs are at an intermediate level of training and still learning how to apply their training in a field situation, each penalty was only counted as a minor deduction, provided they were making progress toward the blind.

We repeated this sequence of double retrieve, blind retrieve and honor for 31 dogs – 29 in contention plus the test dog (who honored for the first dog) and a bye dog (who was asked to retrieve while the last dog in contention honored him). 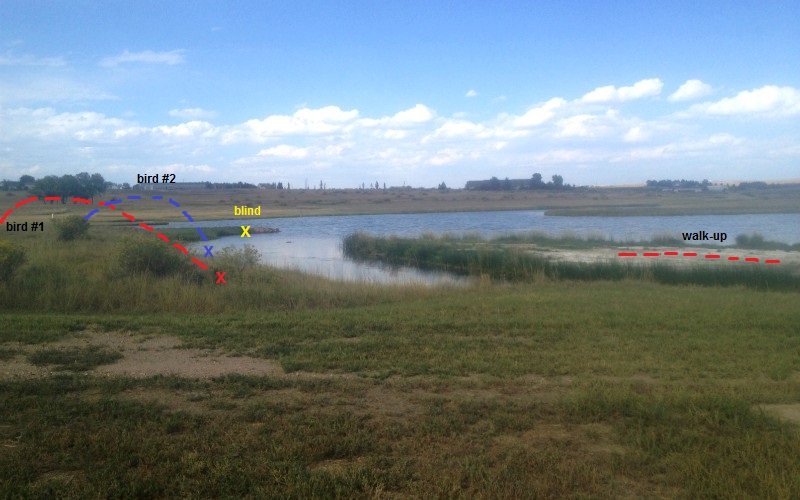 Dogs who had a passing score on land were “called back” to run the water series.

We moved a 1/4 mile south to a spit of land with a water channel on the left side and open water on the right. This series was a double retrieve and a blind retrieve with a walk-up and a diversion shot. No honor, no live birds.

We started with the handler walking down the spit with their dog at heel. When they got to a certain point (known only to the judges), there was a gun shot and a bird was hand thrown to land in grass about 8-10″ tall and about 4-6′ from the water’s edge. The second bird came out slightly left to right, with another gun shot, and landed with a splash about half way down the channel. Both bird techs were hidden behind tall bushes.

The dogs could retrieve the birds in any order, however when they were returning with bird #1, there was a diversion shot to set up the blind.

The blind was across to another spit of land and was placed just out of the water. Except for some suction to the old falls and to a tiny bit of land poking out of the water, this was a straight forward blind. All the dogs who attempted it did fine. 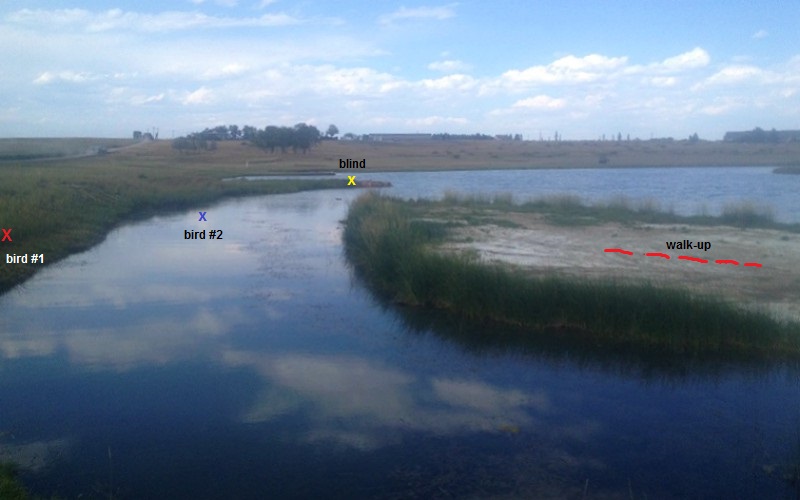 Click the image to see a larger version. This is the same setup, just from a slightly different angle.

Our goal as judges was to make both series as hunt-like as possible while staying within AKC’s rules for a Senior retriever hunt test. We also wanted the handlers and dogs to enjoy it and to make sure everyone was safe. Some dogs did very well overall, some did better on one series or the other and some had enough trouble that we couldn’t give them a ribbon this time. We got several compliments on the test set up.

I’m grateful to the Mile High Golden Retriever Club for asking me to judge, to the owners and handlers who entered their dogs, to all the helpers for handling the myriad of jobs and to my co-judge who made it so easy, it felt like we’ve been working together for years.

By the way, all of my dogs got to experience that great water. The adult dogs loved it. The younger ones quickly learned that the end of grass doesn’t always mean there’s a gentle slope into shallow water. =D And the drive home was rather quiet – except for some snoring coming from the back.