(Updated Apr 4, 2020) English Labs, American, field-type, show dog - how can there be so many different styles of dogs and all be considered Labradors? My guess is that the breed is just too popular - for 28 years now (since 1991) Labs have been the #1 breed in America per the American Kennel Club (AKC). Distinctive styles have evolved to suit everyone's varying tastes, and I'm not saying that's a good thing, it just is.

At one end of the continuum are the show dogs - often called "English Labs." They tend to have heavy bodies, blocky heads and short legs. I think they're a product of the more is better syndrome - the standard calls for a broad head, so let's make it massive, etc. They're also a product of what wins - a dog wins Best of Breed at a prestigious show and people sign up in droves to breed to him in hopes of duplicating him and his wins. Unfortunately some of these dogs have become caricatures of the original Labs who were bred to be field dogs. A 100-pound, 22" dog with profuse coat wouldn't be my first choice to chase wild ringnecks in South Dakota. That said, I am seeing a shift to a more moderate dog in the show ring, except for the Labrador-only specialty shows where structure is generally excellent, but more-is-better still reigns.

At the other end are the field dogs - often called "American Labs." They tend to be tall and slender with whip-like tails, skinny heads and lots of energy. These dogs can spend all day hunting or running multiple marks at tremendous distances and still want more. They too are products of the more is better and the whatever-wins syndromes. These dogs are generally bred for their abilities rather than their looks - trainability, marking ability, and intelligence. These breedings are all about trying to produce field trial winners with less regard for the dog's structure or appearance. However there are some field-bred dogs who still look like a classic Labrador - dogs from early in the breed's history up until the breed really started to diverge in the 1960s.

I've seen an adult female Lab who had the height, bone structure and even head shape of a Whippet. I've also seen an adult male Lab who had heavy bone, massive head, thick coat and, except for the height difference, could have been mistaken for a Newfoundland. Some also have a short muzzle and very deep stop (where the tops of the skull and muzzle meet) that reminds me of a Neanderthal. No joke!

To be fair, dogs from both ends of the continuum fill particular needs and are loved and cherished by their owners. Plus there are many dogs that fall somewhere between the two extremes. However the extremes are quite different from the classic Lab - a medium sized dog who loved to retrieve.

I imagine owners of both styles are asked, "What breed of dog is that?" If that's the case then those dogs are not "typy." Type equals that which makes a Lab distinguishable from a Golden Retriever or a Rottweiler or a German Shepherd or any other breed. According to the Labrador standard, the "most distinguishing characteristics of the Labrador Retriever are its short, dense, weather resistant coat; an 'otter' tail; a clean-cut head with broad back skull and moderate stop; powerful jaws; and its 'kind' friendly eyes, expressing character, intelligence and good temperament." 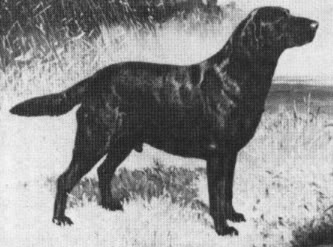 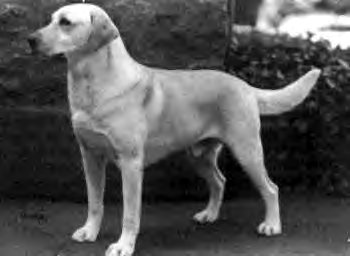 Another great from the past was CH Shamrock Acres Light Brigade. "Briggs was an outstanding show dog and sire. He produced 93 AKC Champions and won 12 Best in Show awards and 75 Sporting Group placements." Compared to show dogs today he had way more leg and less substance, but look at those shoulders and the balance! I'd bet he moved exceptionally well.

I am happy to see some progress - or at least interest - in returning to the moderate Lab, one not overdone or underdone in body style and that still has the desire to retrieve. We call these dogs Dual-Purpose Labradors.